Welcome to our school

In Nursery we have been learning how to greet each other in other languages and can now say hello in French and Spanish.  Some of the children were able to talk about other languages they had heard or that their family members speak at home or on holidays.  We also took part in European Day of Languages with the rest of school where we learned some simple French phrases and found out about some French foods. 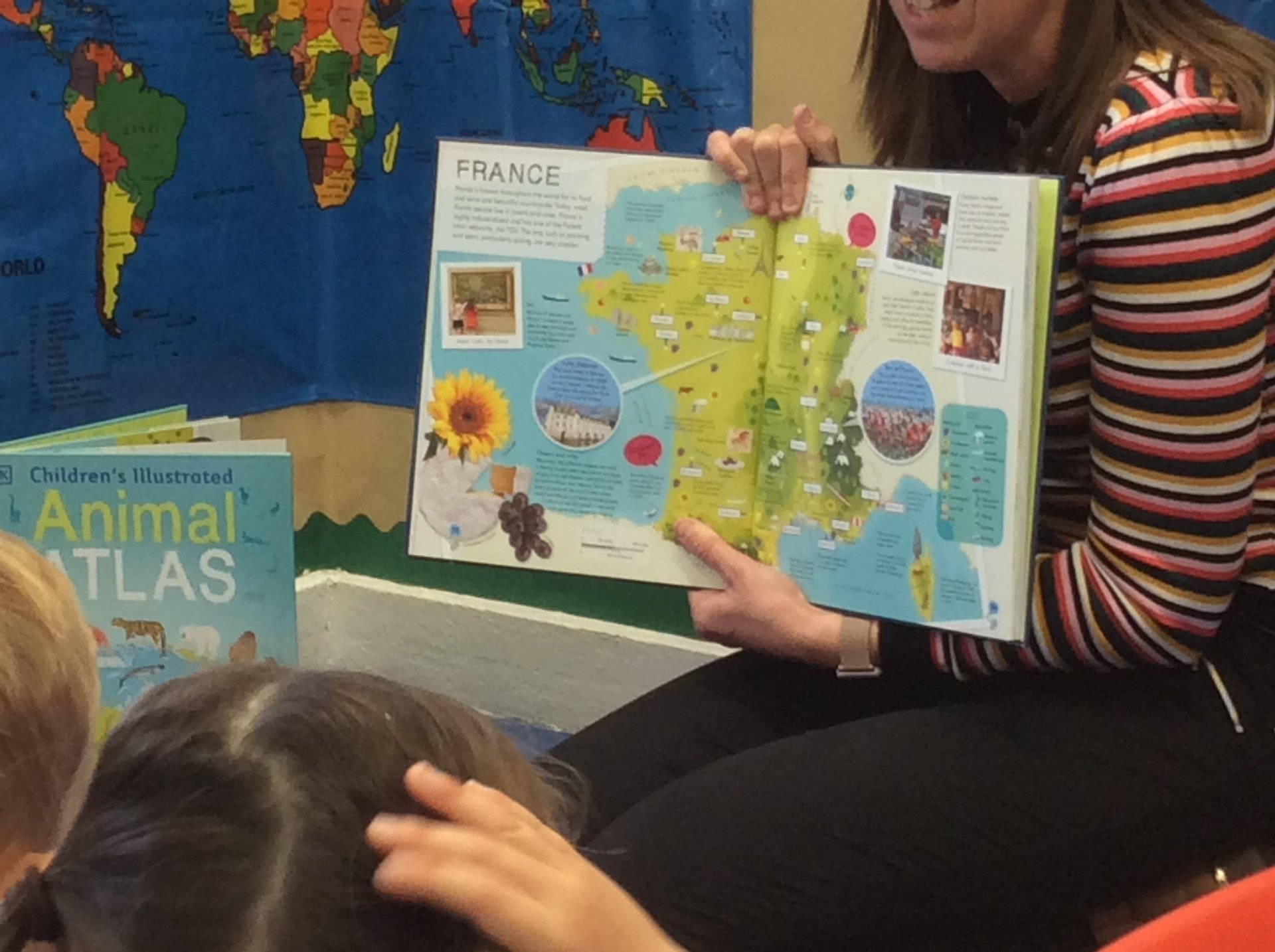 In September, to mark the occasion of European Day of Languages, Reception learnt all about France. We chose France so we could learn some words in French as this is the language that is taught as the children progress through school. First, we looked at a map to see where different countries are and mainly the countries in Europe. We located the United Kingdom on a globe and then looked to see where France is. We also used an Atlas to find more information. 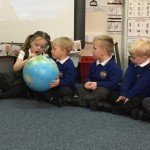 We learnt some simple phrases in French and chose to learn the words to Frère Jacques. The children enjoyed this version and also leaning the same translation of the song in English. We performed Frère Jacques to Mrs Atkinson who is the Languages co-ordinator of the school; she was very impressed!

Following on from this, Year 1 confidently respond to the register with ‘Bonjour Madame…’

Lower KS 2 learned the names of many different modes of transport using flashcards. They then matched them all up in pairs before taking turns to test if they could say the French word to their partner who then had to match it to the picture.

In French this term, Year 5 have been learning all about the names of the planets and how we can use adjectives, prepositions and conjunctions to express information about them.  We have developed our spoken and written work in this area and have been able to translate sentences in French which are about the planets. Our work on conjunctions has progressed to the use of ‘because’ and ‘so’. 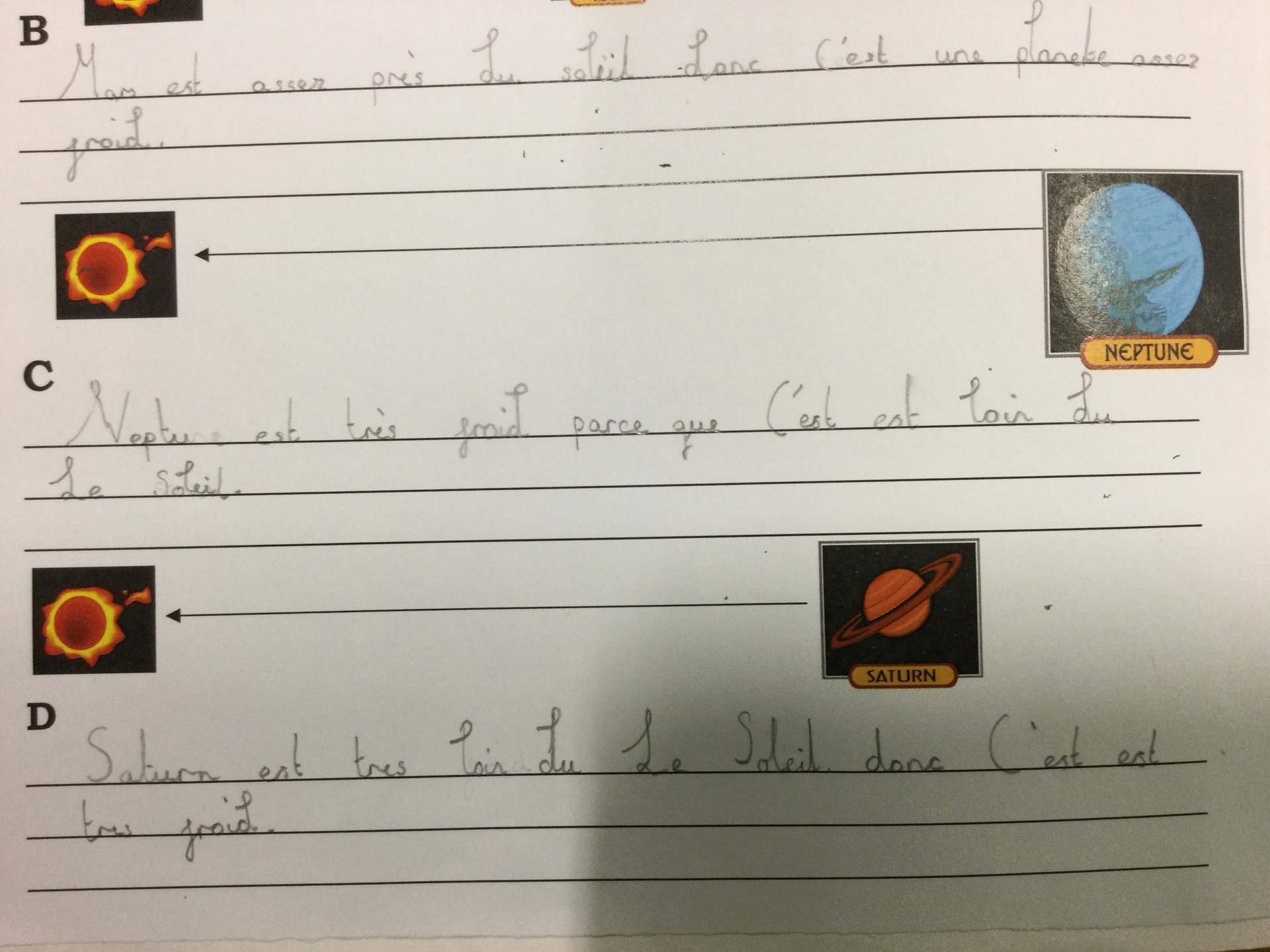 Additionally, we celebrated European Day of Languages by learning a number of phrases in German and we explored what life would be like in a school in Germany.

Y6 children have been exploring vocabulary for food and drink and to celebrate European day of languages, we sampled a range of French foods.

In Year 3 we learnt the French version of a familiar playground song.  It was ‘Le Fermier dans son Pré.  Can you guess which song that is?  Here is the music for you to try paying it at home: 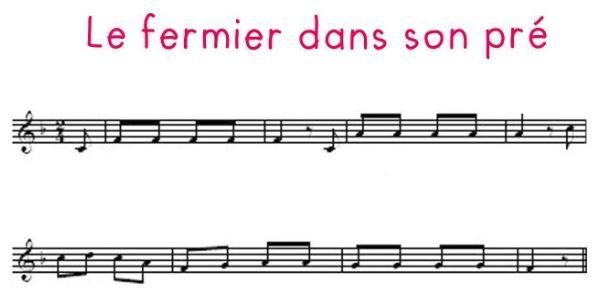 We learnt how to read and pronounce the French words and noticed that many don't follow the phonics rules that we know for English words.  We recorded our performance of the song using our class iPad.

In French this term, Y4 we have been learning the names of different animals and enjoyed describing what each one does. For example, ‘le cheval galope’ (the horse gallops)

We have listened to, translated and retold the story of ‘Les Quatre Amis’ (The Four Friends) and enjoyed playing the characters of the horse, sheep, rabbit and mouse.  We particularly focused upon identifying the nouns, verbs and adjectives.

French students studying at Durham university came in to talk to Year 5 about life in their country. They shared pictures and information about places to visit in France, traditional foods they eat and celebrations that are unique to them. It was a fabulous opportunity for us all to hear their accents and get some practice with using the words and phrases we have been learning in class. 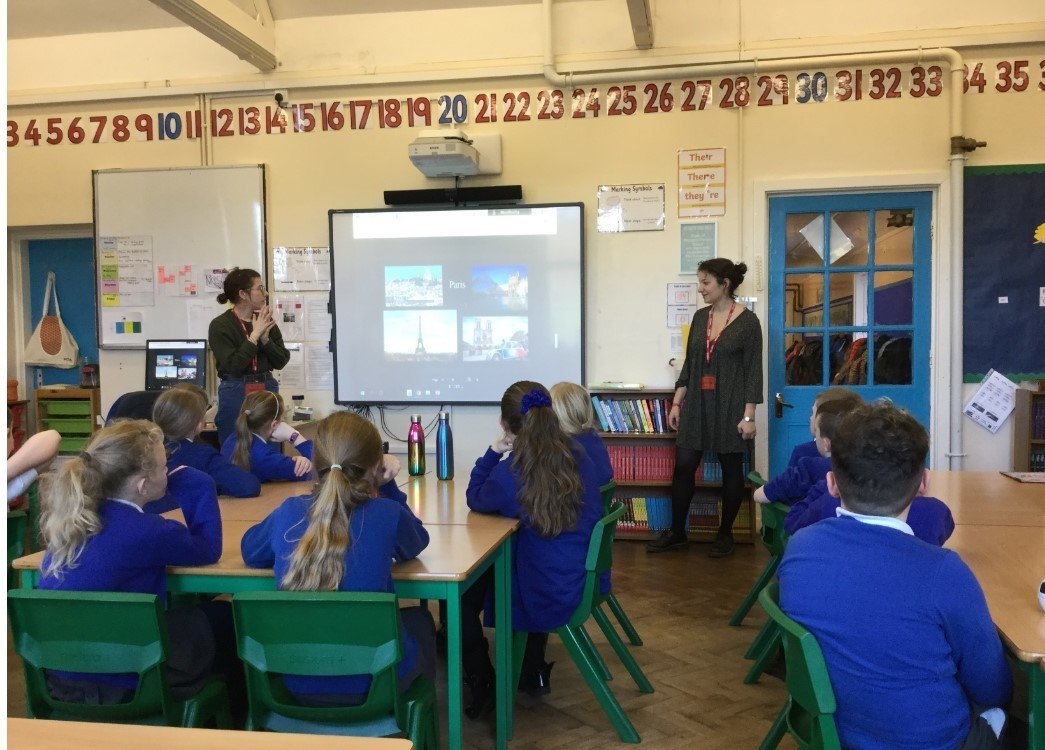 In Y5, we try to incorporate some French into our daily lives in class whether that be to answer in French during a Maths lesson to show our understanding of numbers in French, replying to the register or through playing games and activities we keep in our drawers to reinforce our learning in MFL.

This term we have focused on knowing numbers to 40 and to accurately read and pronounce multiples of 10 up to 100. We have continued to look at word class and started to write short sentences in French describing a journey.

Y6’s topic this term has been ‘Our World’. We have been learning how to pronounce different geographical locations and features such as ‘les fleuves’ (the rivers) and ‘les continents’ (the continents) of the world. 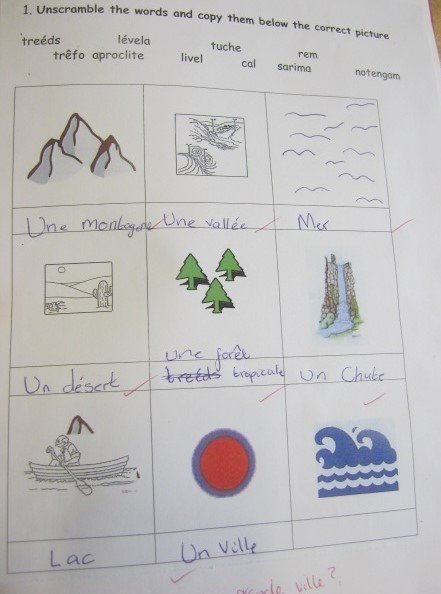 Look below at some of our amazing translations! 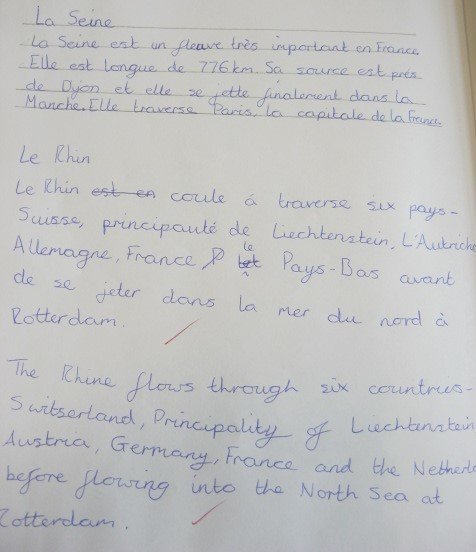 In September, the whole school took part in celebrating The European Day of Languages.

Early Years have been learning to say hello in lots of different languages and they use these new words to answer the register every day! 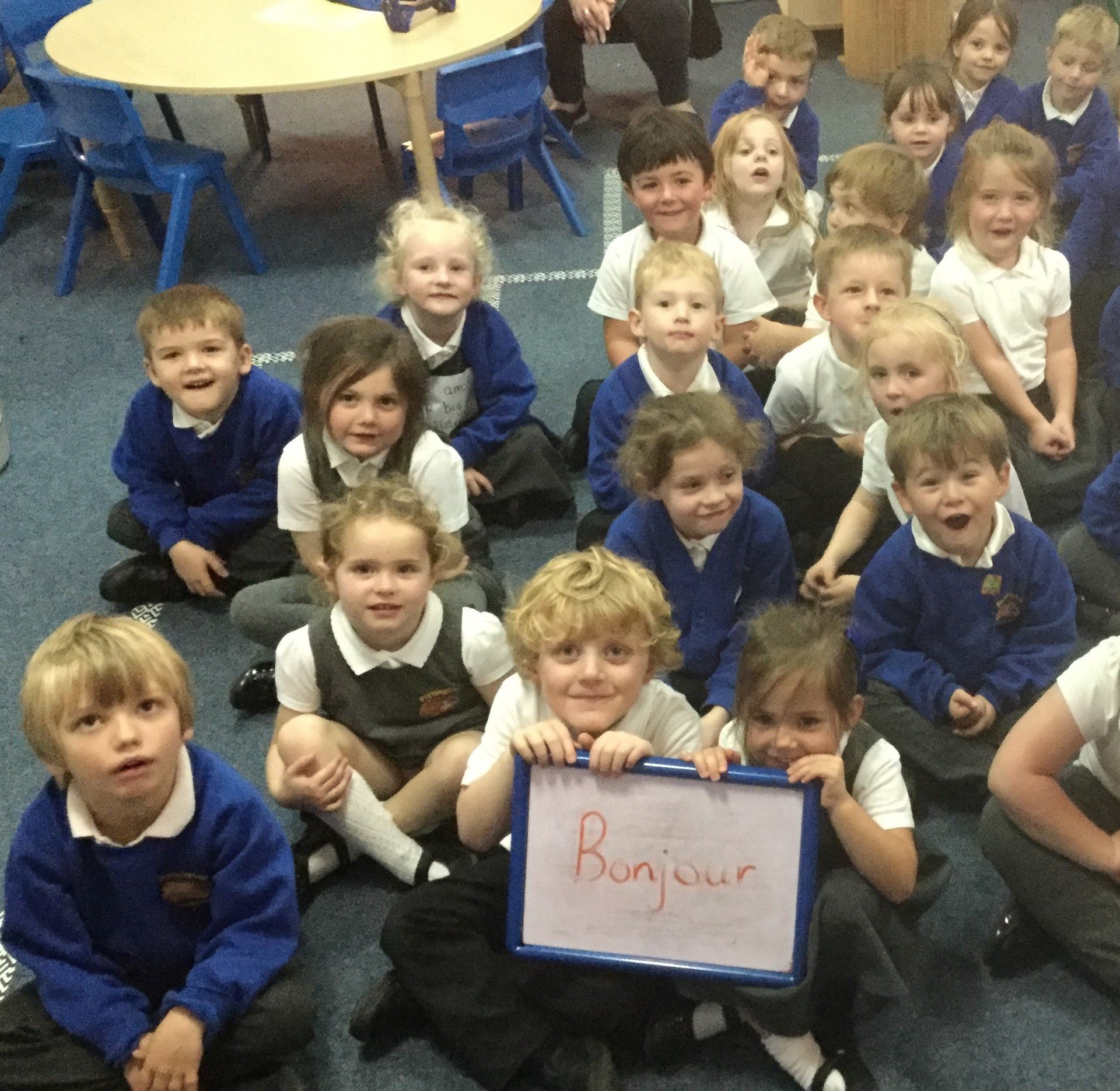 To highlight European Language day we explored everything French.  We looked at landmarks such as the Eiffel Tower, learnt some colours in French and even learnt the rhyme Frère Jacques.  We explored it’s meaning too.  We enjoyed this so much that we’ve added it to our class song-box!

In Year 1 we have been learning about France. We have learnt some simple phrases that are used in everyday life, have tasted some French cuisine and have shared what we know with others in the school and family members at home. During registration the children love to answer in French and will even respond to some questions in French!

We have also started to explore greetings in other languages such as Spanish, and German.

Year 3 began the busy term by learning about the countries and corresponding continents where the French language is spoken.  We then learnt phrases that link with greetings and introducing ourselves.  Then on the European Day of Languages we learnt these same phrases as are spoken in Spanish.  As the term continued we looked at the numbers from one to twelve and linked them with the both the clock face.  We began to ask question for each other and could now respond with our age.  In the final weeks of this term we have began to learn to sing in French the traditional song ‘Sur le pont d'Avignon’.

The children can all name the days of the week and know how to say their birthday in French. They have enjoyed finding out about a school in the south of France and have written and sent Christmas cards to pupils at this school. 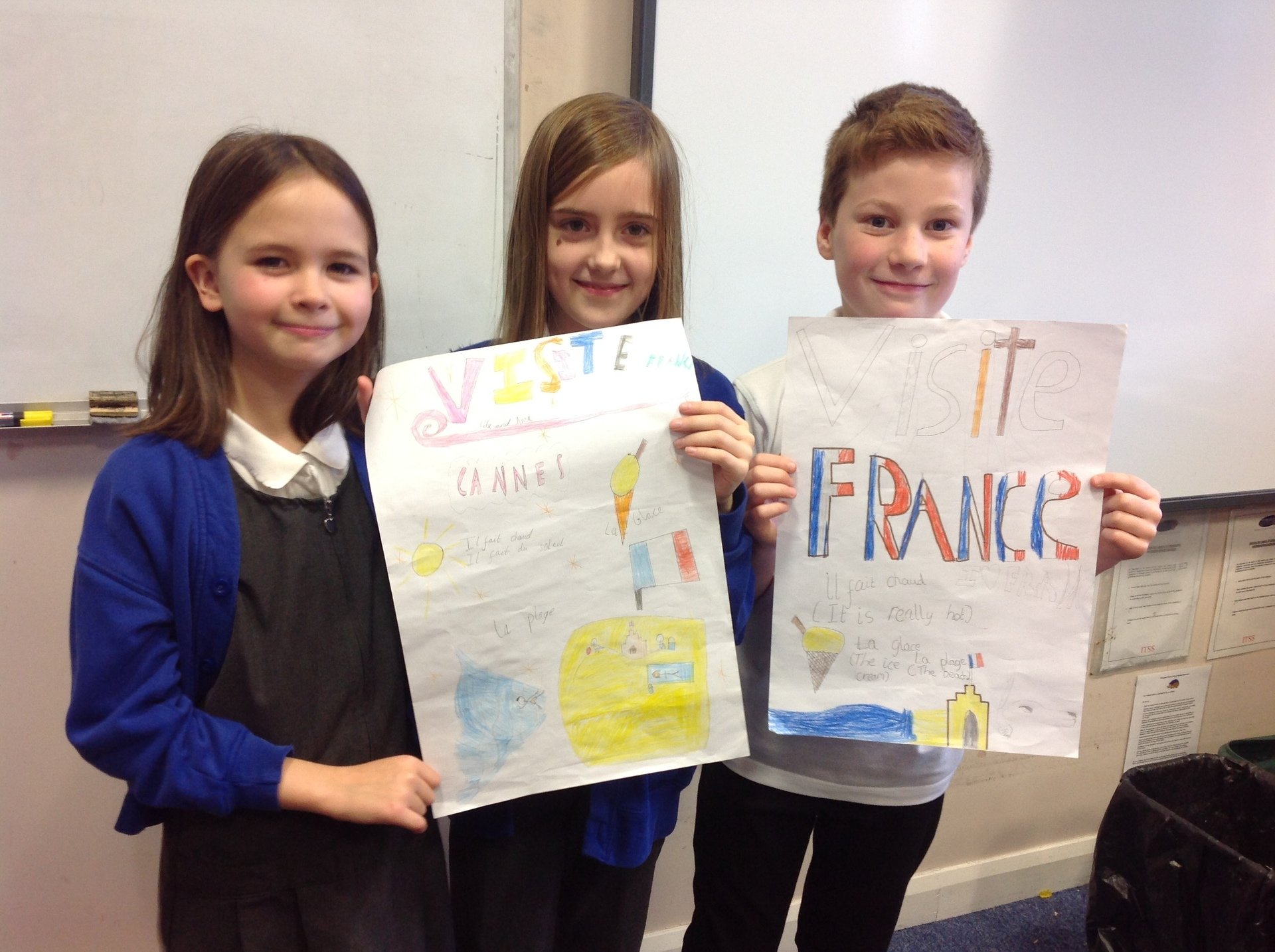 We also participated in the European Day of Languages and explored greetings in a number of different languages before developing our use of the German language. 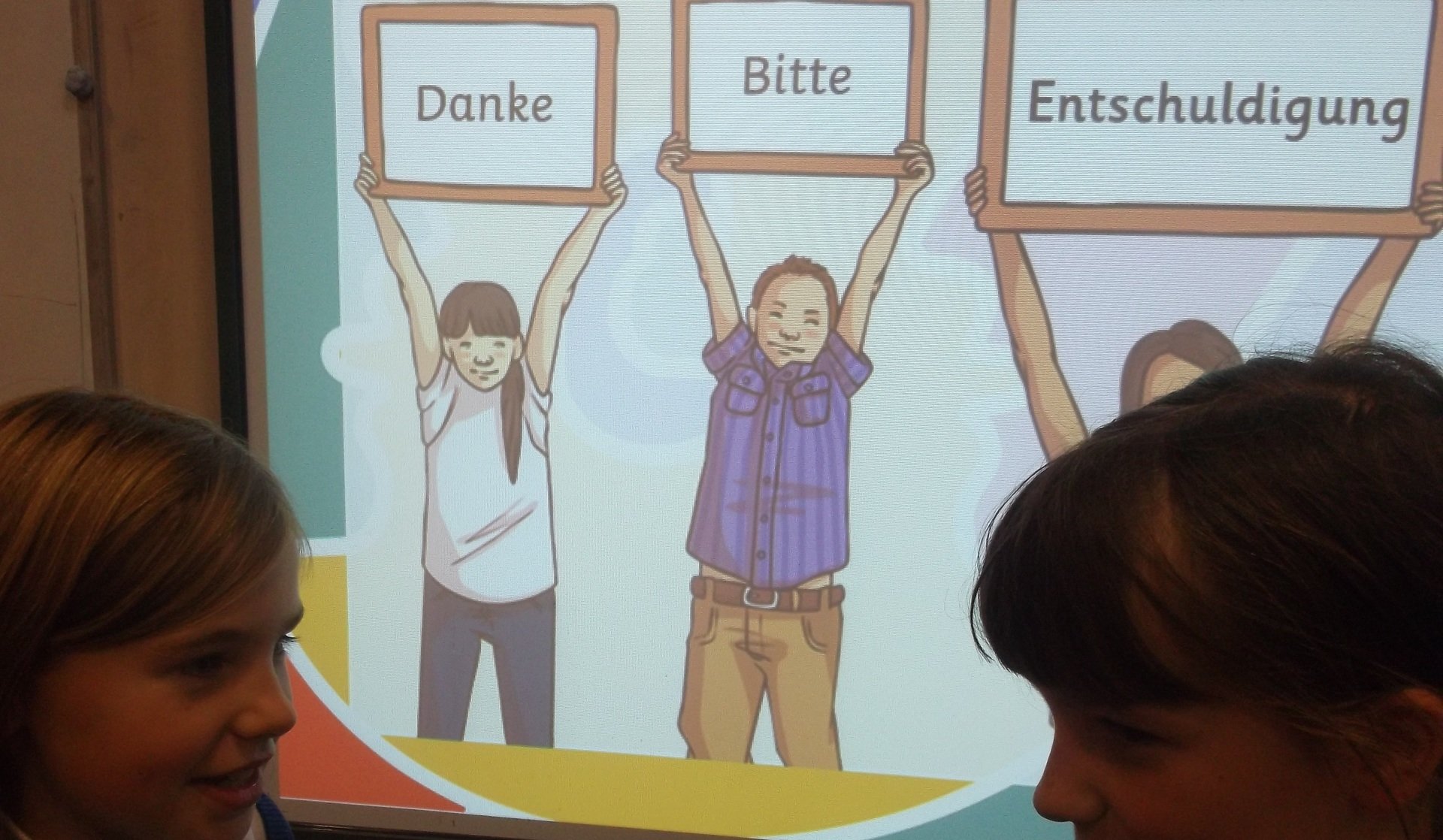 To celebrate MFL day, Y5 decided to look at a different language and learn some German. We found it on the map and looked at landmarks, did some research on food and made flags. We learned how to count to 10, how to greet each other, say where we live and how old we are. Mrs Emmerson needed to know numbers slightly higher than ten for her age...

Year 6 have been learning all about food and drink.  By the end of the unit, we were able to translate most things off a French café menu!

Some French students from Durham University also came in to talk to Y6 about French culture.  We enjoyed listening to what they had to say and having the chance to ask them questions.

When designing our Christmas cards, we also thought about using different languages. 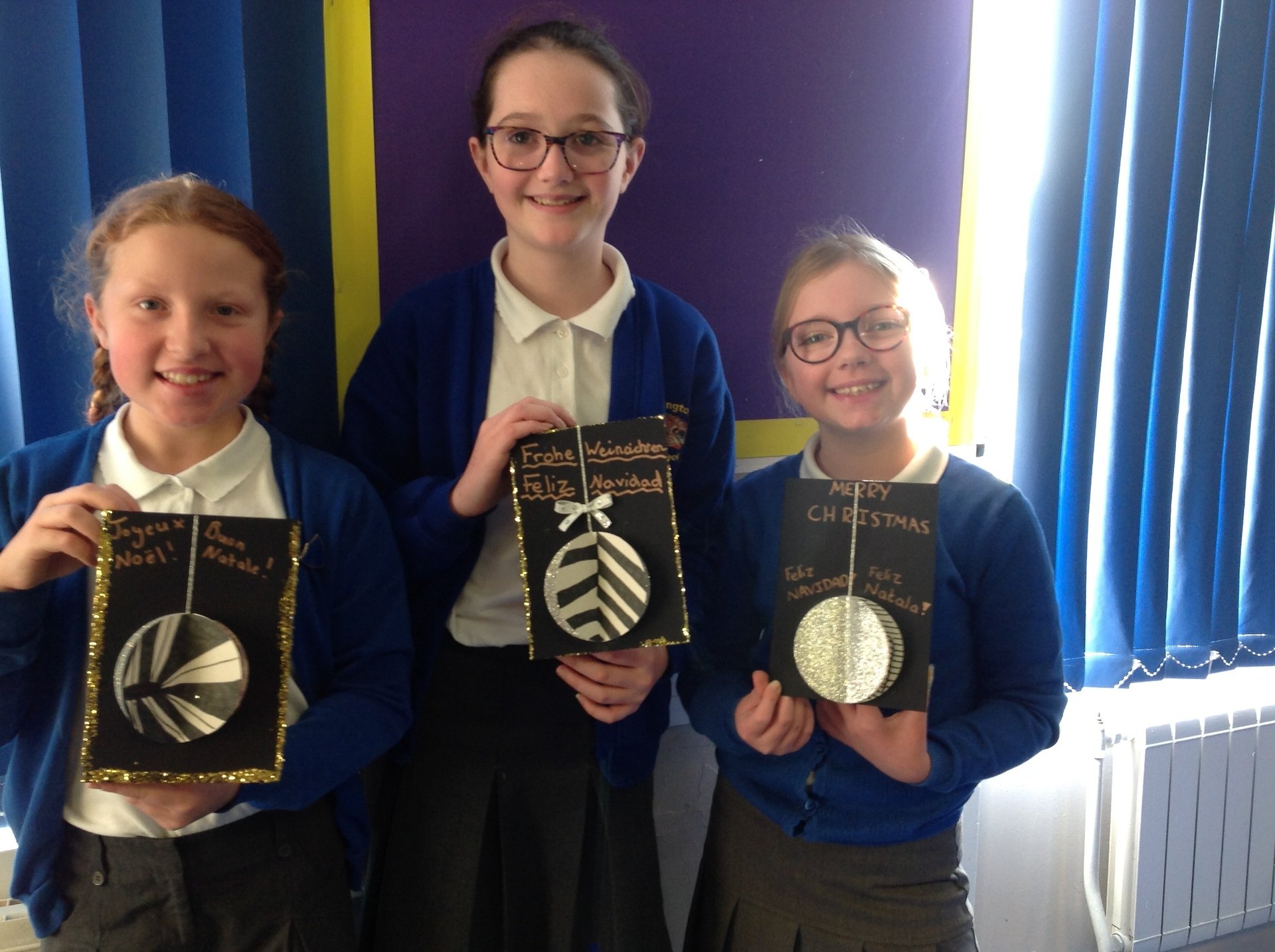 We like to play games to enhance our understanding of the vocabulary taught.  Below children from Upper KS 2 are playing a game called ‘Allez Les Escargots’ (Go Snails!) 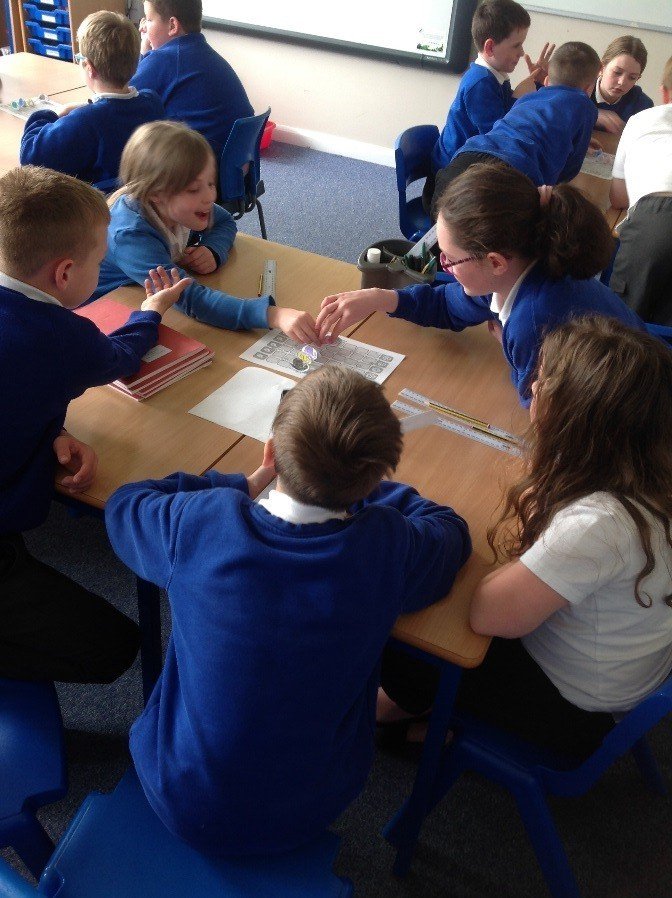 Here children are considering different types of French shops and the kind of items sold in each one.

Mr MacMahon, a French teacher from Belmont Community School, came in to impart his French expertise upon us! 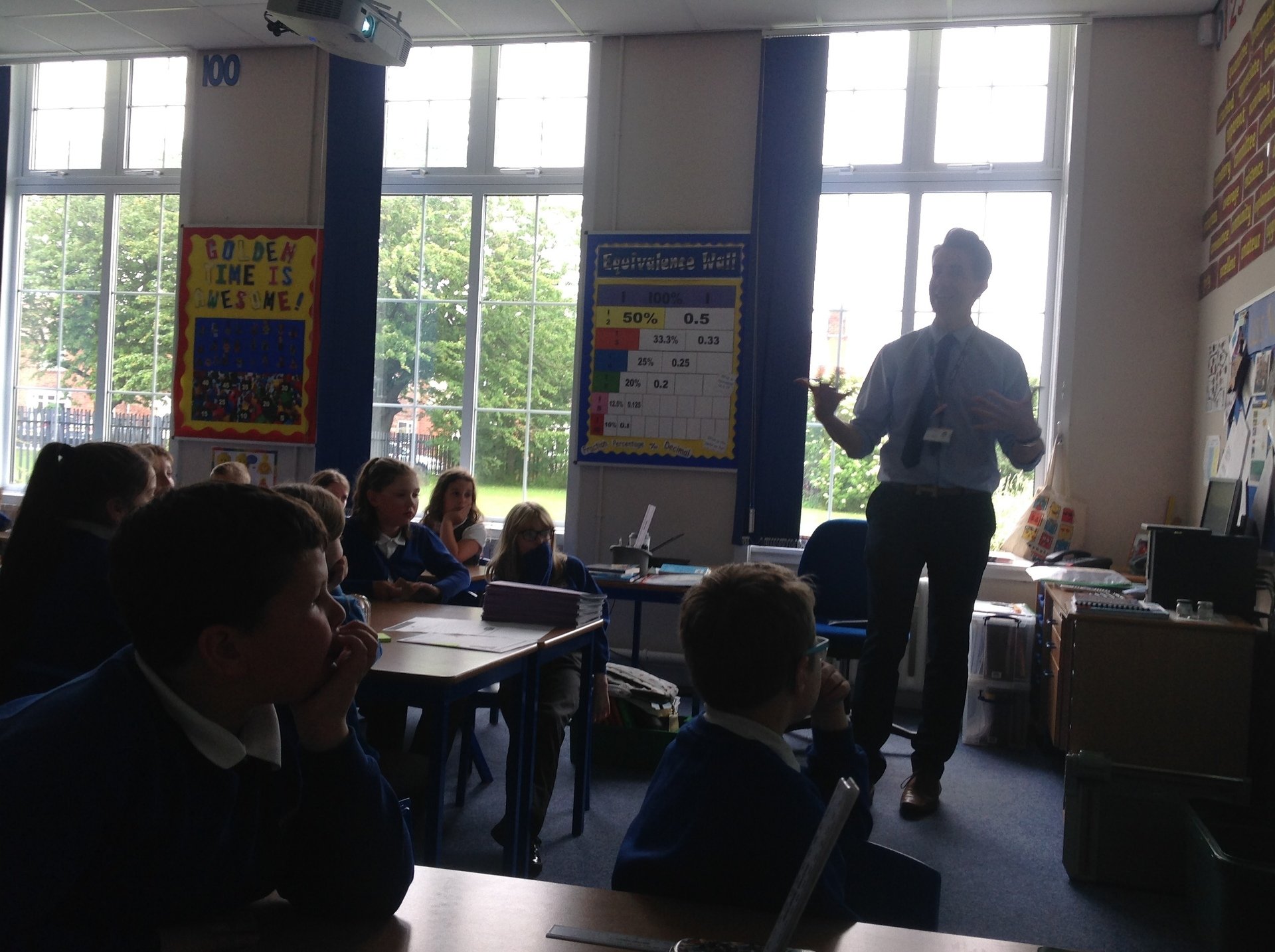 Y3 love to learn French by singing.  Can you guess which song we are singing in the picture below? Clue: Tête, épaule, genoux et pieds. 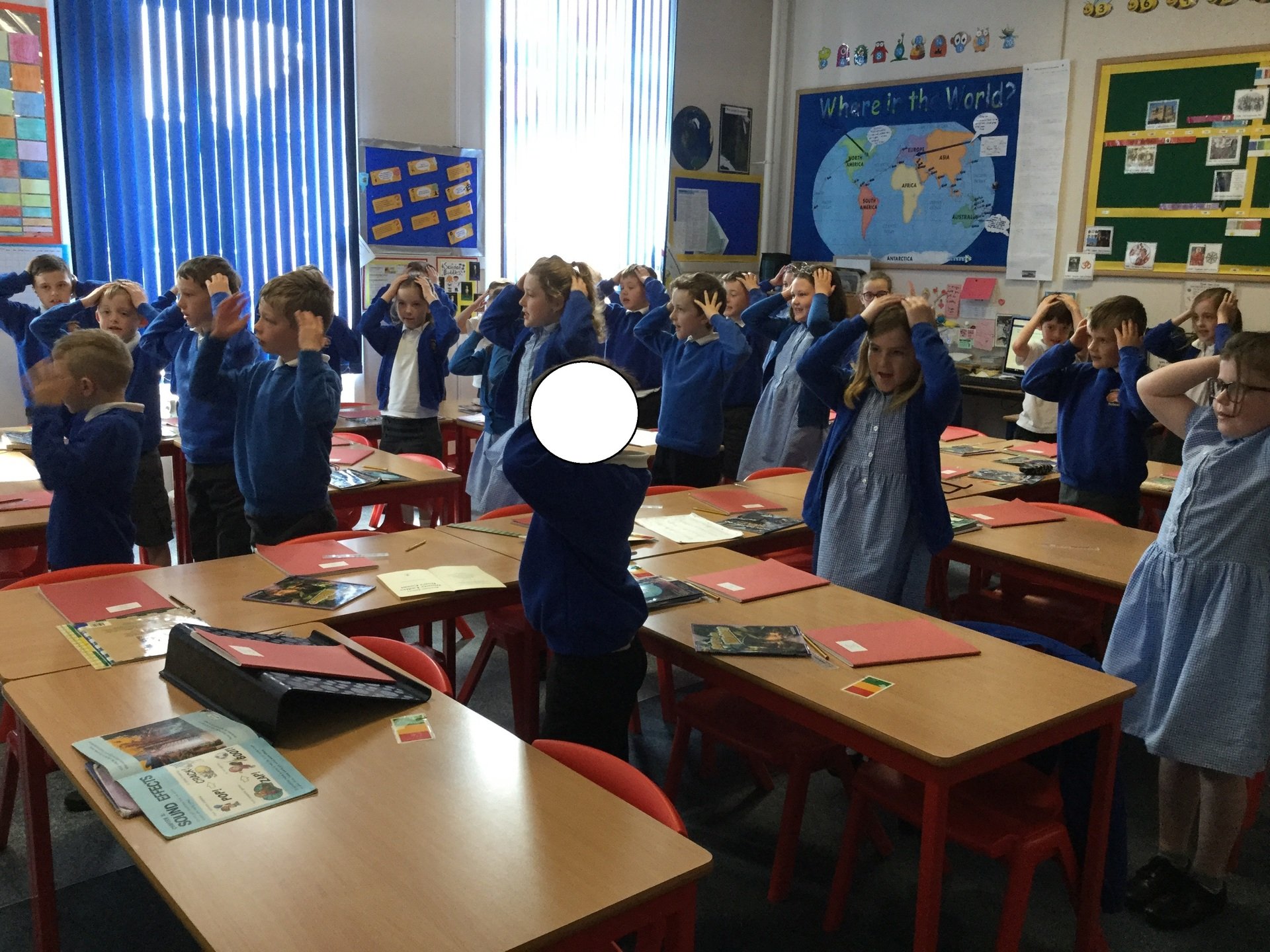 Lower Key Stage 2 enjoyed playing musical statues to practise different commands and actions.  Can you guess what they were doing? 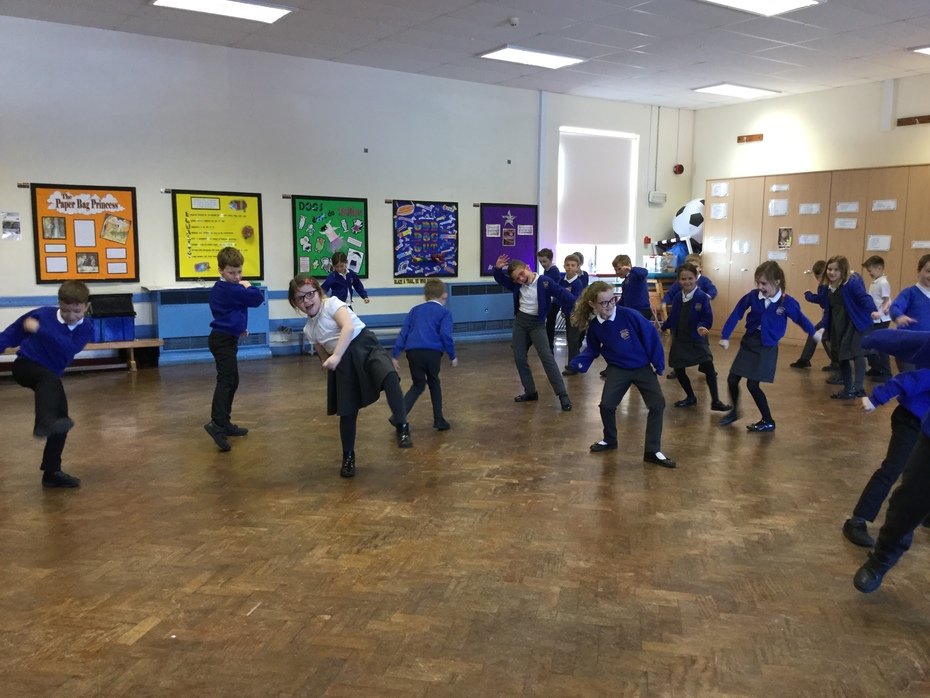 This was the command ‘joue au foot’. (Play football). 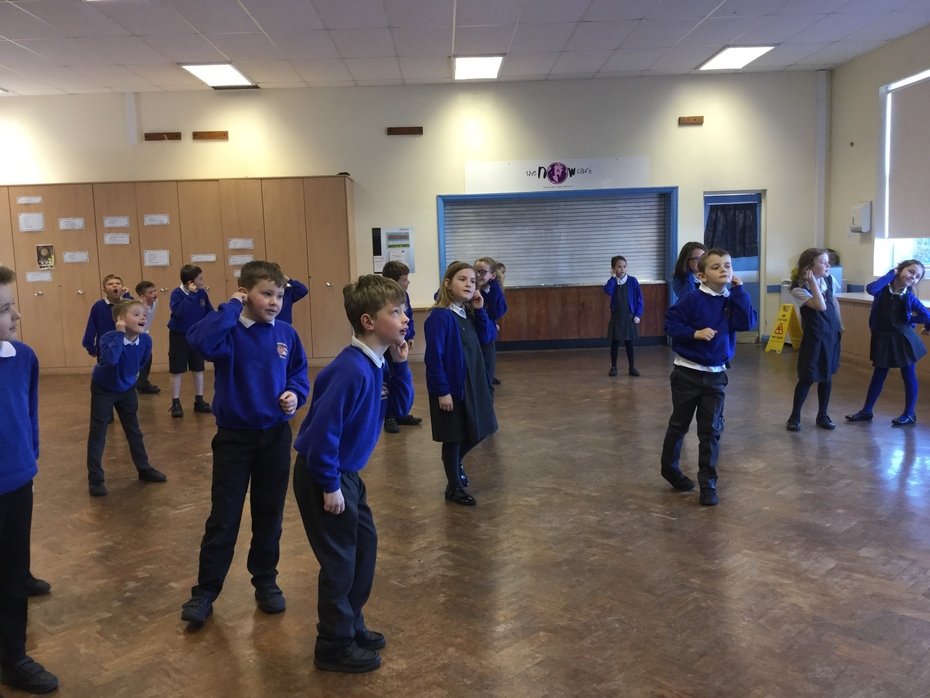 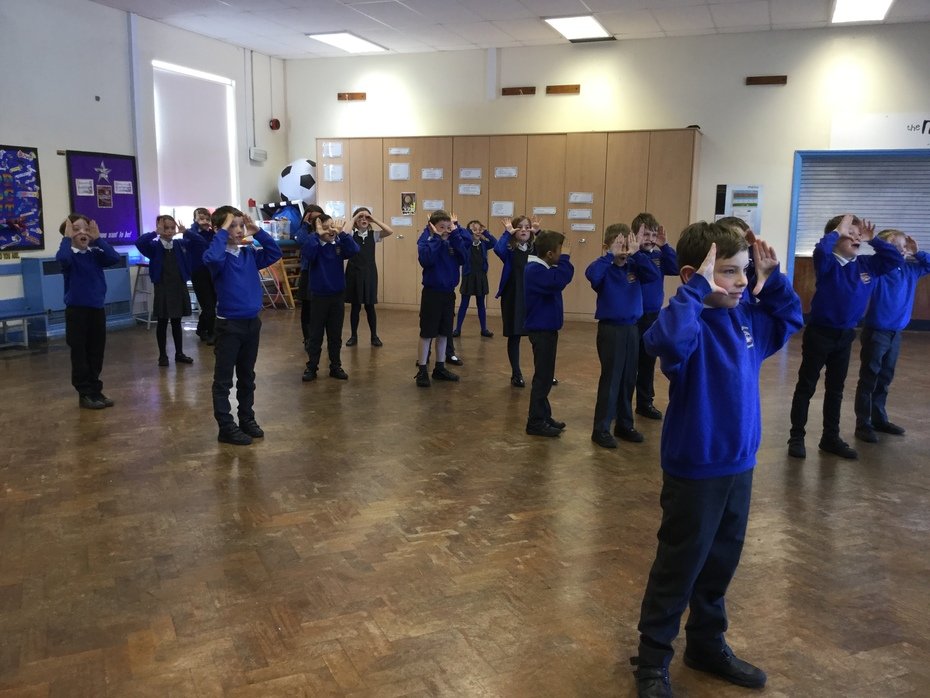 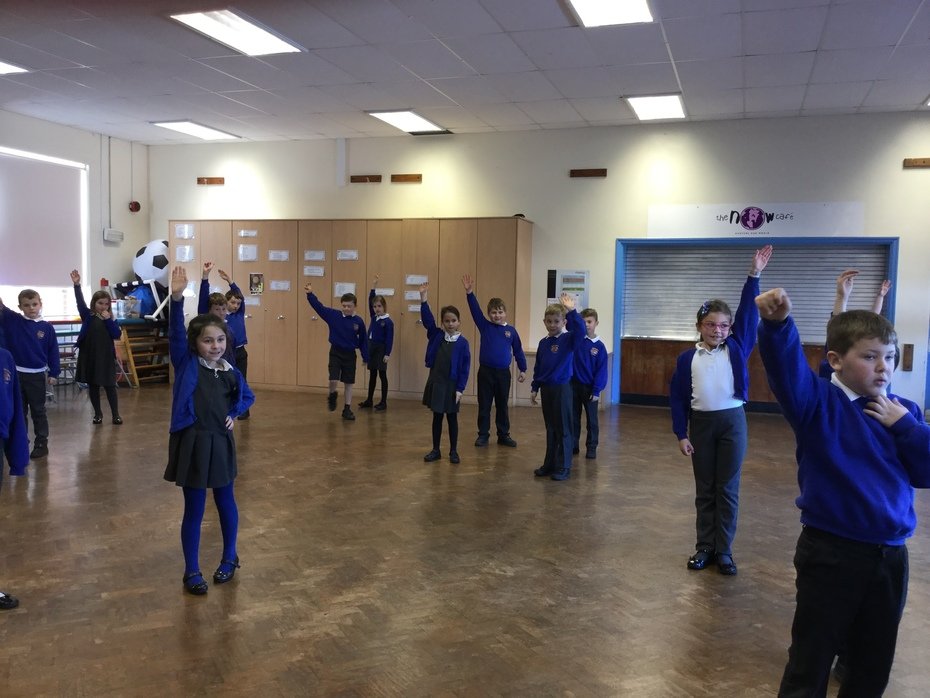 We have also enjoyed singing and learning the vocabulary for  Le Fermier Dans Son Pré (The Farmer’s in his Den). 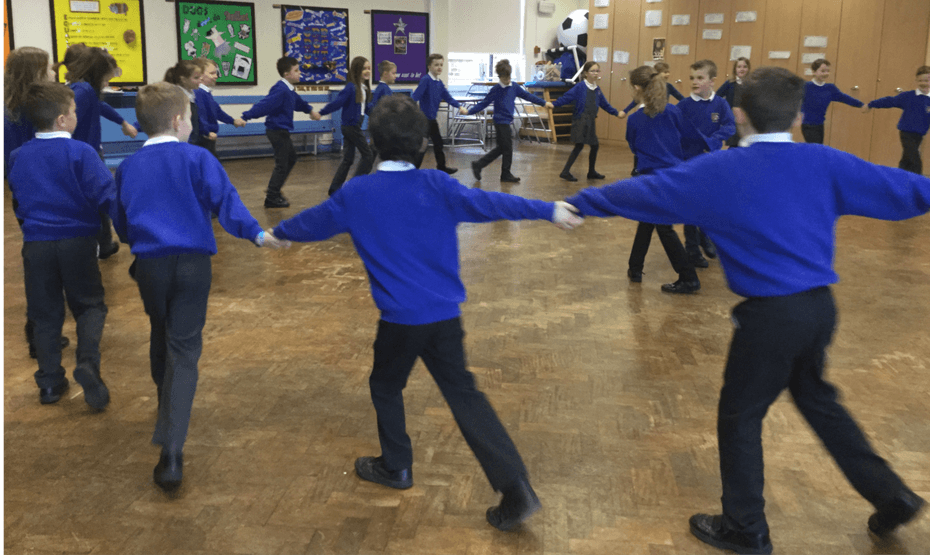 Year 4 have been learning about a story called Les Quatre Amis (The Four Friends).

In this picture, the children have thrown a cube to generate sentences to say what an animal can or can’t do.

La souris ne lit pas.   (The mouse does not read). 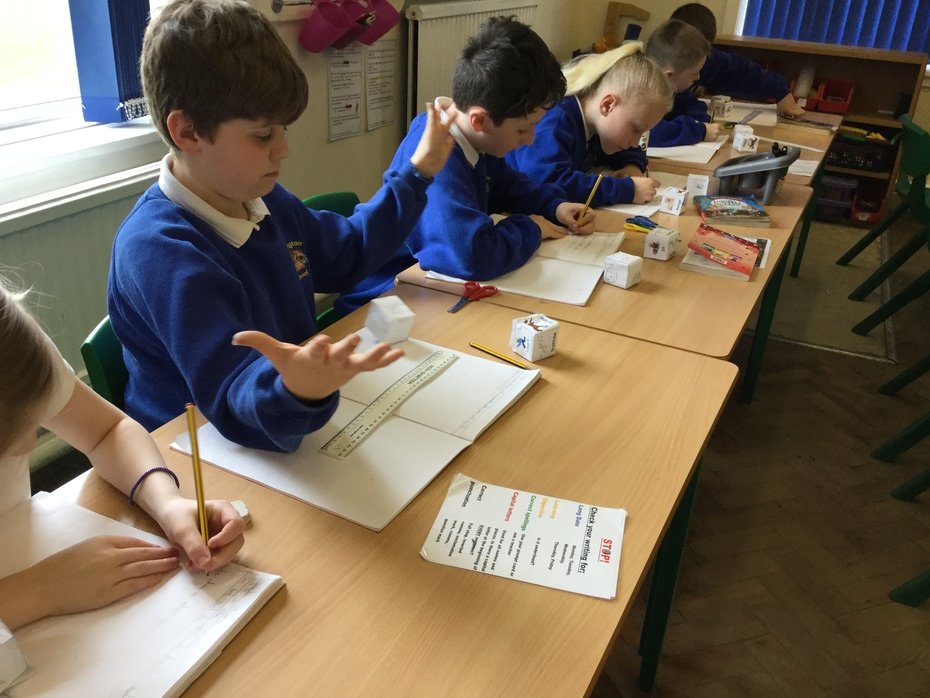 Upper Key Stage 2 have been learning about features of a town and planned an imaginary journey to school. Look at the map below and see if you can follow these instructions to find out where school is: 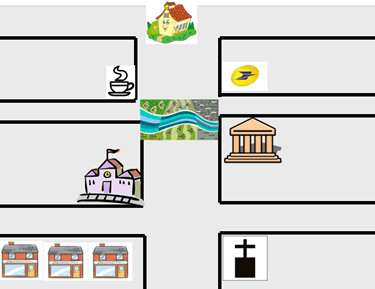 An example of this can be given from Term 3 in Year 3.  At this point, children are introduced to colours which are used to describe simple facial features.  By Year 5, in the Beach Scene unit, colours are revisited and used in full sentences to describe Degas’ painting. 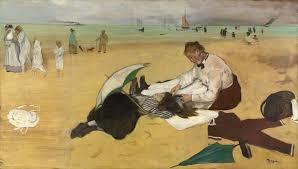 This time, not only will the noun and adjectives will be in the correct order (which is different to English), but masculine and feminine noun agreement with the adjectives will also be taught. Here are a couple examples of our Year 5 sentences:

We learn French in a variety of ways, including singing, playing games and role play. In the following photograph, Lower Key Stage 2 children are role-playing being in a French market. 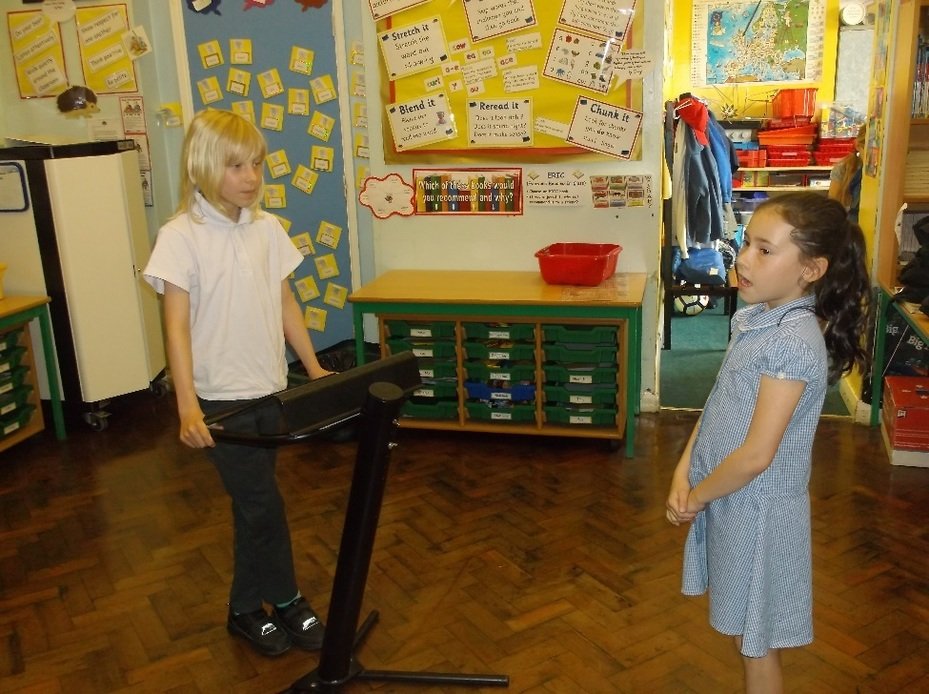 Here is a clip of children singing a traditional French song called ‘Sur le pont d'Avignon’ (On the bridge of Avignon).